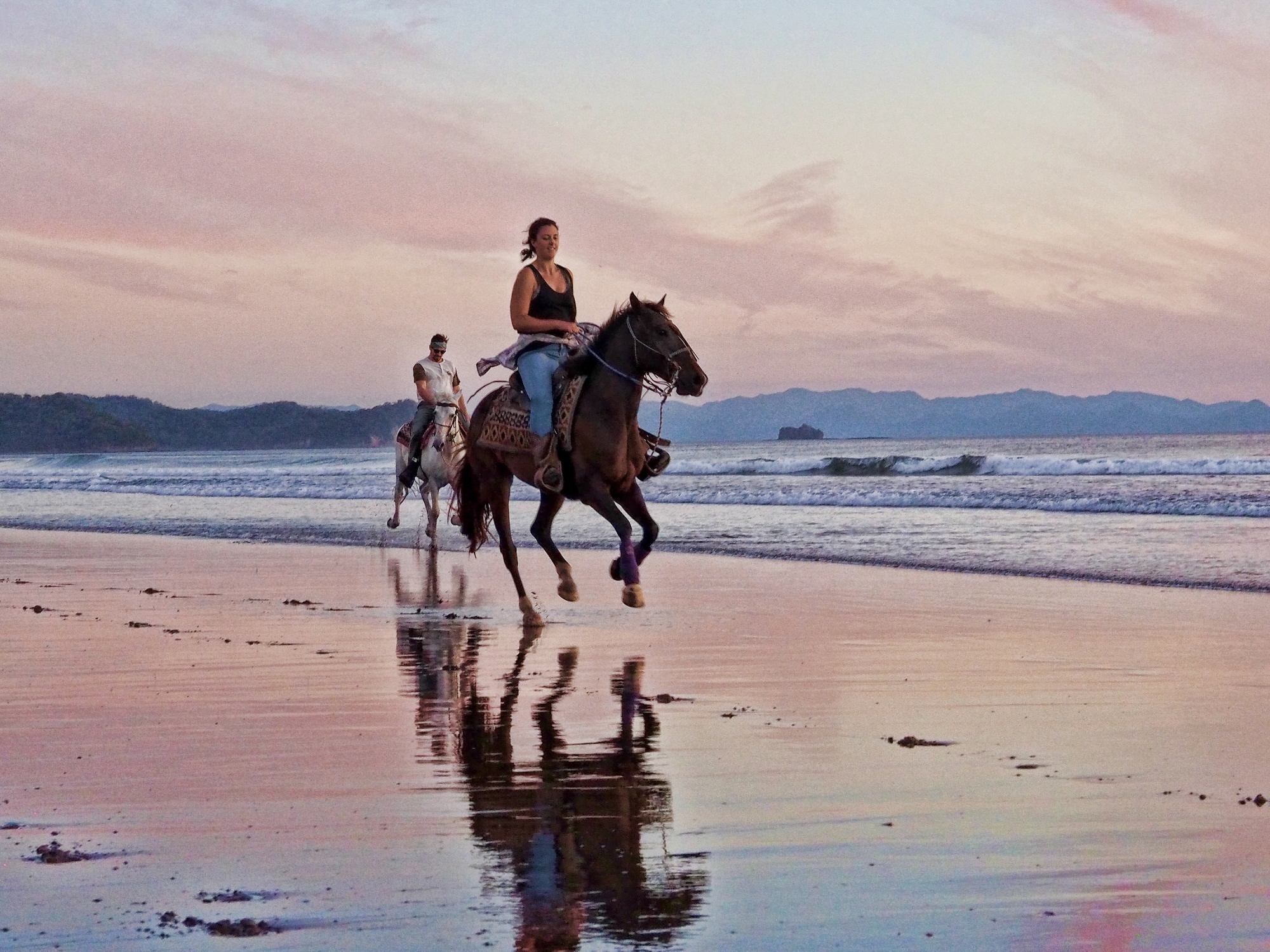 When I was younger, my mum & I rode horses a lot. I had a dappled grey welsh mountain pony named Chippy and she had a white Arabian called Laurie. I’m pretty lucky to have been raised on property by a parent who let me gallivant around on a 300kg horse without supervision. I never really learnt to do anything formal, but I was confident around horses from a young age and I loved them to pieces.

Skip forward 10 years and I’m trying to pay my way through a round-the-world-trip. I stumble upon a listing for a yard hand and exerciser-of-horses in the north coast of Spain. It’s here that I learned to jump, dressage and handle young horses, an entirely different ball game backyard pony riding, especially when most of your lessons are in Spanish!

Wherever I go in my travels, I’ve always tried to get on horseback. It’s a different way to explore, you can often cover a much greater distance and go to places you normally wouldn’t on foot. I’ve ridden horses big & small in England, Peru, Vanuatu, Spain, South Africa, Australia & Cuba. But I have never been horse riding like this.

Enter: Rancho Chilamate, Nicaragua. This was unlike any experience I’ve ever had. From the moment I was picked up in an old Hilux and told to just ‘jump on the back’ to the end of the ride when I was served rum nightcaps before we left the ranch, it was truly a pleasure to be in this part of the world.

I left my friends in San Juan Del Sur to do their thing and went to the ranch on my own, a little bit hesitant that it would be awkward and lonely. I needn’t have worried. I was greeted by some of the friendliest cowgirls & boys I’ve ever met (they refer to everyone as a cow girl or boy in a south-western accent, and I’m instantly transported to a Dude Ranch!) and led into the ‘boots n’ shirts’ room. Yes, they provide cowboy boots, hats & flannelette shirts to make sure you look & feel the part!

We had our photos taken, which at the time made me feel strange and awkward as I’m usually camera shy, but I’m so glad they did take these shots – just look at them below! And not only do they capture the day perfectly, the proceeds of the purchase (a mere $20) go to proving local communities with services, like school photos. It seemed like a lot of the money that went into the ride also went back into the community, which is fantastic. 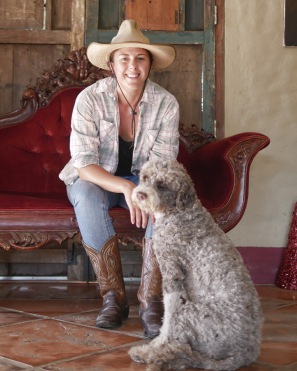 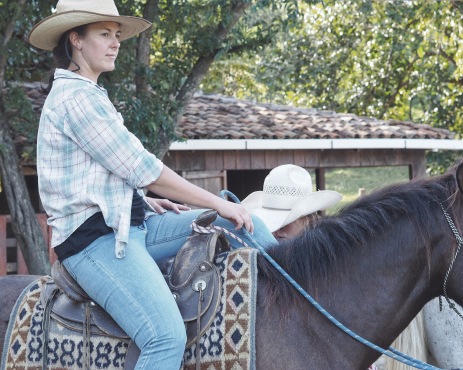 We were introduced to our noble steeds, mine being Elvis (a stocky 15hh liver bay) and headed off into the sunset. Literally. The cowgirl guides left us to ride how we liked (with a little instruction on the basics of Western) which meant I could spend the time getting to know the horse and the people riding them, without any hoverers. I’m not sure if I was lucky or not, but my group was exceptional. I only wish I had spent more time at the ranch getting to know them all, they were all so interesting and seemed interested in my life too, which is so rare for fellow travellers these days!

Riding Western is amazing. It’s so much easier than English, the horse pretty much does all the work and it feels so much ‘cooler’! Elvis was an absolute champion. Anne, one of the cowgirls did say he was the ‘best’ and I have to agree. He had a rocking-chair canter and a deep trot and the softest mouth (this may only mean something to horsey people!). Usually when you go on a ride with horses that are used to beginners, it’s a nose-to-tail kind of set up. The horses pretty much know where to go and ignore any commands you may give them. To me, riding is best when you’re in control, when any light touch of the heel or tweak of the reins pushes the horse in a certain direction. Each horse is different, and it’s great getting to know how they respond to you. A lot of horses don’t respond at all, which is the worst! Don’t get me started on a ride I had in Cuba on a lobotomized grey! But Elvis was fantastic. He was responsive, comfortable and had a little fire to him, which I loved. Once we reached Playa Yankee, we were all given a beer and a few tips on how not to fall off a horse galloping at full speed and led onto the flat beach. For next time, gallop before beer – you’re in the clear. The other way doesn’t work so well and I can’t make it rhyme! 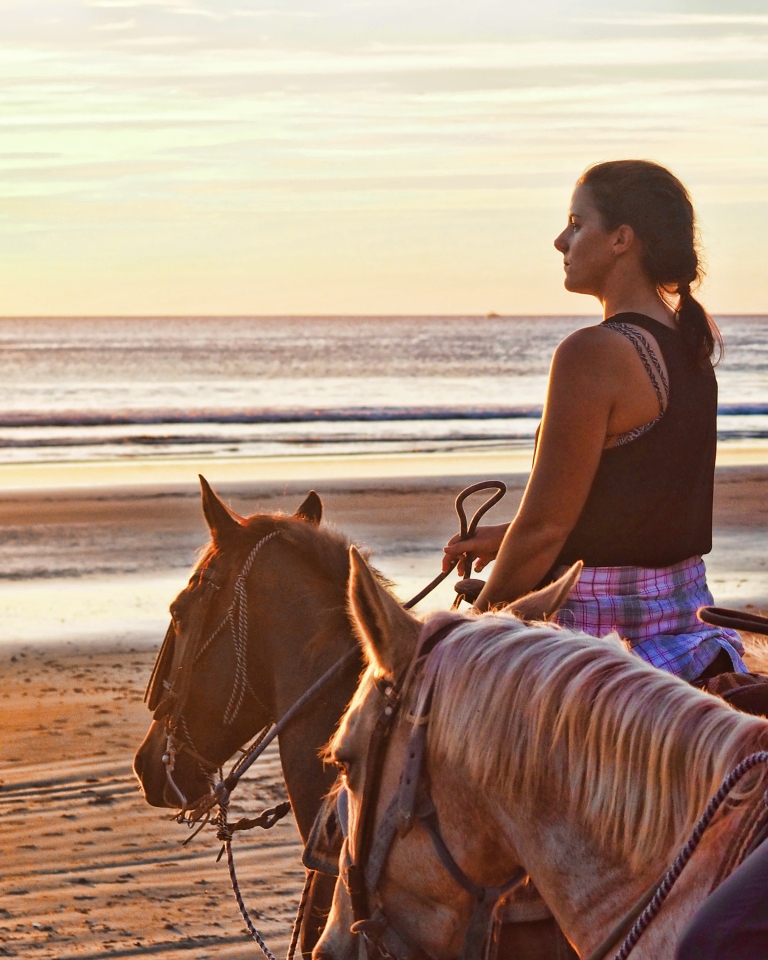 From the moment we got to the beach Elvis knew what was happening. We were asked to do a lap at a trot and Elvis was pulling a little, head high, mane flying in the breeze, ready to go! We started at a canter, which was so comfortable, until I heard Anne on her horse behind me shouting ‘you can let him go Clare’. I can? Isn’t there a law against that? Isn’t it dangerous to let a rider you don’t know to let her horse go? At least that’s the excuse most riding centres tell you when they only let you trot, canter at an absolute maximum. Nope. Not in Nicaragua. So I let him go. And man did he fly! His little legs stretched as far & as quickly as they could and we were galloping, full speed, along a beach at sunset. I looked to the cowgirls and they all had one hand on the reins, one in the air. So I gave that a go. Amazing! If you’ve never galloped on a horse, this is one of the most exhilarating feelings. The horse is in full control and it feels crazy fast – faster than in a car or on a bike. I think it’s the way the heavy hooves sound and the way you can feel their muscles moving, there really is no power like it. Maybe that’s why they call it ‘horsepower’? But probs not. We did about 5 laps of the huge beach before (trying) to calm the horses down. I had to lead Elvis in big, slow loops as he just wouldn’t stand still. This is usually a naughty trait in a horse, but I loved it. It was like being on one of those horses in western movies who are always prancing around & ready to leap into a canter! We were greeted with rum shots before the home stretch, standard for these guys I’m assuming! My hair was all over the place, sweat all over my face and a huge grin from ear to ear, knowing that this was a trip highlight and an evening I would never forget. 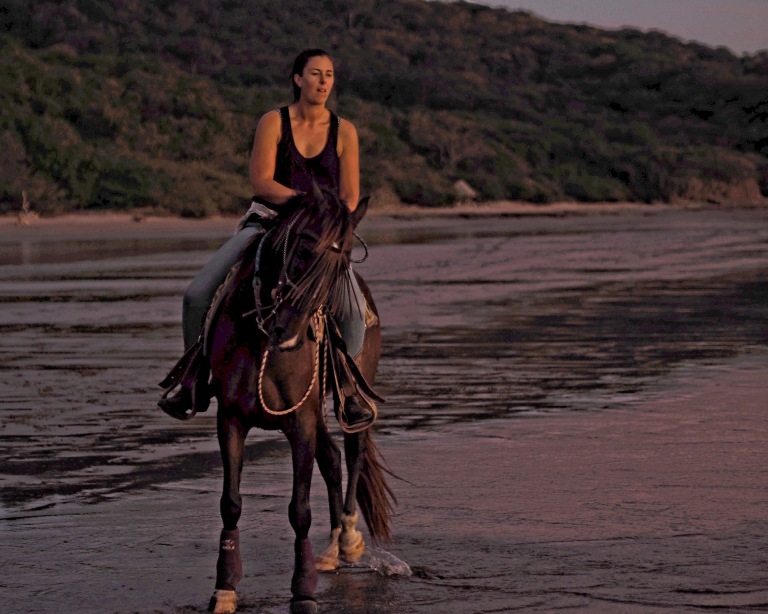 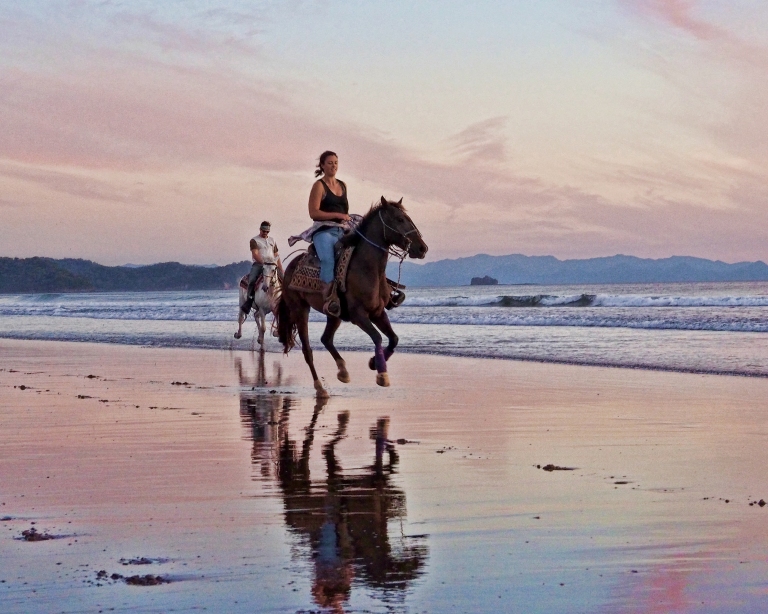 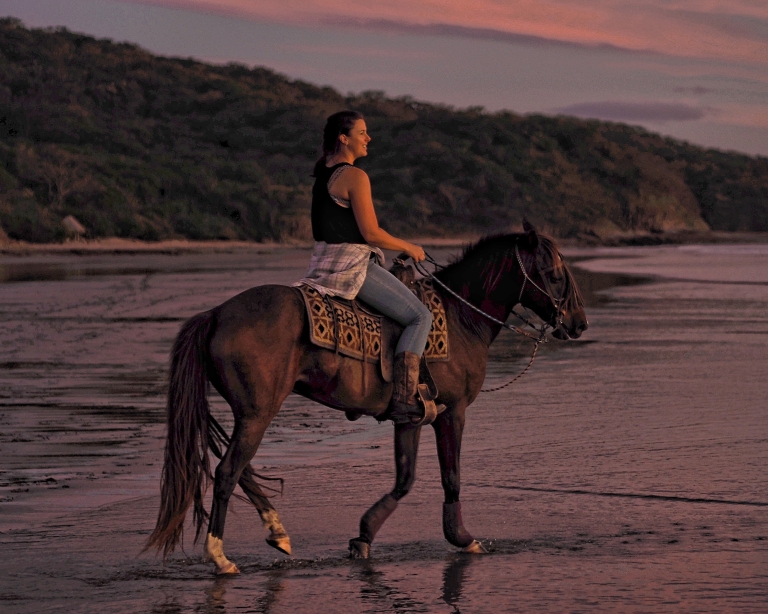 The ride home we all talked about where we were heading to on our next adventures, spotted fireflies in the dark jungle & listened to howler monkeys in the distance. I was worried that my friends, who had agreed to pick me up at the ranch, were bored and annoyed, as we were over an hour later than I thought we’d be. Again, my worries were needless as I was greeted with happy faces & excited stories of how they’d met the owners of the ranch, been taken down to the river to give horses a bath, given wine, spoken of adventures, talked of surf shops & bitcoin (!), and that they’d had a great afternoon by the pool waiting for me! This just attests to the ranch being a great & homely place to be, whether you ride or not, and we found ourselves wishing we’d booked a night’s accommodation.

I was given one more shot of rum before bidding my farewell. A sad one to say the least. Whenever I’m at work wondering why I’m not still travelling, I think of evenings like this one, that truly transport you to a different life, one that might not be so amazing if I were living it permanently, but that brings a smile to my face to imagine.

Thank you Blue & Crew for creating a truly memorable place. I hope one day to be back there, & hopefully Elvis will be there to ride with me off into the sunset once again!

2 thoughts on “A slice of horsey heaven in Nicaragua”