Have you dreamed of a place where the sand is white, the water turquoise, the sun is out everyday and the palms rustle in a light breeze? A place where shoes are optional & the Mayans have built a mighty city on the shoreline for you to explore? Then look no further than Tulum, Mexico.

Be warned, Tulum is the type of place where timing is paramount. Unfortunately for us, we visited at Christmas. Now don’t get me wrong, it was still beautiful. But we structured our days in order to try and avoid the crowds. The key to seeing Tulum at its best? Get up before sunrise.

Now those who know me well, know that I have seen very few sunrises in my lifetime. The one thing I’m an overachiever at is sleep, and I dislike very much waking up early. However, I make an exception when I’m on holiday. Seeing the world at sunrise & sunset is one of my favourite things about travel. And Tulum really delivered at sunrise!

When we first arrived in the afternoon, we went to check out one of the beaches, the famous Playa Paraiso. If you google this beach, you’ll find pictures of deserted white sand, blue water & palm trees. It was not like this. By 4pm, every American on vacation was headed down to the beach to set up their ‘cooler boxes’ and set in for the evening to drink beer, play loud tunes and be generally rowdy. I felt particularly out of sorts, as I appeared to be the only female on the beach wearing a bikini that didn’t ride completely up my arse. There were fake boobs & juvedermed lips everywhere, all on display. Countered by ripped, tanned abs, but not the kind that a naturally athletic Latin American man would don, the ones that are carefully sculpted in a fully-mirrored gym, with the assistance of protein shakes & clean-shred eating. Not my scene. After perusing down the beach and deciding it was everything we hate about tourism, we decided to fork out at one of the local resorts for a fully-priced cocktail overlooking the beach.  Mezzanine resort was proper-like! It was well fancy! But totally worth the $20 margaritas to pretend to be rich for a day and avoid the cacophony. If you do happen to be super loaded, DEFINITELY check out this resort though, we said if we ever made millions we’d come back and stay there. It was amazingly beautiful & exclusive and the food looked next-level delicious! I just googled though and its only $200 per night? Actually not that ridiculous! Next time..

Anyway, after this experience, we decided to get up before sunrise the next day (Boxing Day) and head to the beach when everyone was hungover and still sleeping! And my god, what a different place it was in the morning! All the photos you see are from 6-8am. By 9am, the first of the ‘beach exercisers’ were rousing and by 10 it was full of people on the Bloody Marys, ready to start again!

The beach is a fantastic place to walk at this time of the morning. You’re completely on your own, and the water is still warm. You don’t have to compete for a bike spot and you if you get hungry you can just pop into one of the resorts for breakky. Its definitely hard to be amazed by beaches overseas, mostly because Australia has some of the biggest, most beautiful, unspoiled beaches in the world, but Playa Paraiso is definitely one of the most beautiful I’ve seen, mostly because of the amazing ruins that rest on its shores.

The ruins are small in comparison to the other sites in Mexico such aa Teotihuacán, Chichen Itza, (or Chicken Pizza) and having just come from Tikal in Guatemala, I wasn’t sure what to expect. But the ruins are really well preserved and the location is just stunning. You can imagine how the the Mayans used the city as a fortress and capitalised on the great fishing location, right next to the sea. But what a piece of real estate! I highly recommend visiting Playa Paraiso at sunrise and making sure to get to the gate of the ruins for opening. You will have most of the place to yourself before the maddening crowd arrives. And it does arrive in full force! By 10am we were making haste in the opposite direction towards town!

By bike. There is no other way. Well there is, you could catch a Collectivo (shared mini bus) or walk, but the town is super flat and the paths are built for bikes, and it really is the most pleasant way to get around. You can hire a bike very easily from the multiple hire stores on the main strip of Tulum. You can also hire scooters, but after an incident in Nicaragua we were hesitant to hand our passports over as a deposit! Everything is within cycling distance and if you want to go a bit further out of town the buses are very easy to catch. Getting to Tulum itself is very easy if you’re travelling the Yucutan Penninsula, most buses travel through it on the way to Playa Del Carmen & Cancun.

Oh my god. The food. Mexican cuisine is probably my all-time favourite and I had high expectations. Tulum delivered! Instead of a full roast & seafood spread (like we do in Aus at Christmas), we had a Christmas Eve burrito at Burrito Amor and it was simply delicious! The vegetarian one was amazing! We also had prawn soft-shell tacos at an unnamed road-side restaurant and they were amazing. You really can’t go wrong in this region for good food. As long as you like coriander and chilli!

We stayed in an awesome little Air BnB, very close to town, but not too close that you could hear the clubs going until all hours! Its a self-contained apartment above the house of Lea and Muriel, who were super friendly and even tracked us down when we accidentally left a passport behind! The apartment has Netflix, a mini fridge stocked with beer, coffee machine, & a hammock for lazing around! It was in the middle of a local community, rather than amongst other hostels & accommodation, so most interaction was with the locals rather than tourist, which we quite liked!

This area is famous for its cenotes. These are natural, fresh-water pools that link to underground tunnels. Lots of people come to dive through the tunnels, which sounds like the absolute worst thing ever! But the pools themselves are unlike anything I’ve ever seen! We went to a couple near our Air BnB, recommended by the owner. They were smaller than some of the more touristy ones, and were very quiet on Christmas Day. The water is the most clear I’ve ever seen. It was the perfect way to cool down in the middle of the day. 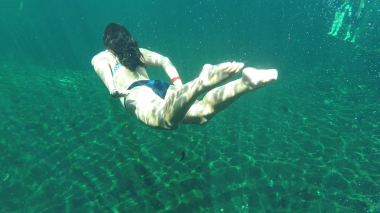 Trying to be a cenote mermaid

I’ve decided in my next life I want to come back as a cenote mermaid.

Tulum is a great place to visit, and we preferred it to Playa Del Carmen. It is smaller, quieter and more traditionally Mexican, albeit a little touristy. There’s plenty to do there and its very accessible. 3 days is more than enough to see the ruins, the beaches and a couple of cenotes.